Scotland knew of Dr David McKenzie Newton’s death in Turkey within a couple of weeks, presumably by telegram. Everyone knew his widow Ebeth was in limbo. What information flowed over the next two years, we don’t know. But we do know about something about 1916, how help was offered, and it was a treat to read some of the bizarrely baroque official consular and diplomatic language involved on the one hand, and the reserved but emotion-packed words in others. Drafts, CC: lists, pencil annotations and typewritten forms survive. Just how did things work back then? During a war! After 100 years here are the few official papers. Like fossils, they have been preserved (unlike most life), and can be found in the UK’s National Archives.

First, we know David Newton’s family approached official channels, and contact was made directly with the Foreign Secretary Edward Gray by his Liberal Party colleague Maurice Levy MP (representing Loughborough 1900-1918 and living in Humberstone Hall in Leicester). Levy wrote to Gray on behalf of John Newton on June 15th (probably this was David’s brother John, aka Jack). This presumably carried some weight (the pencilled note on the letter [Fig 1] notes “ack? [acknowledgment?] – make official”). Levy refers to a letter “sent to me by a friend” in Loughborough, presumably a constituent. Maybe John Newton knew this MP personally, or was a constituent, or maybe the friend in Loughborough was an intermediary. (I have found out subsequently that John was in Loughborough in 1916, and see here.)

On the same day the Foreign Office summarised this as (ref 116992, [Fig 2]): “Mr John Newton would be glad of further particulars respecting [the death of Dr Newton at Smyrna], and asks if assistance can be given to the widow.” Ref 116992 also recorded the state of play: “We have no details about the death of Dr Newton”.

It continues with what is presumably a FO decision about what to do next.”With regard to Mrs Newton, we have just asked Mr Page* to enquire whether there is any prospect of Mrs Newton’s repatriation (112921) and, on the application of the Rev. John Trail** (sic,  cf. Traill above) we are asking that the US Embassy at Constantinople pay Mr James Murray**  the sum equivalent of £100 to be used (inter alia) in connection with Mrs Newton’s repatriation (114692).”
* Walter H. Page was the US Ambassador to the UK from 1913-1918.
** I don’t know who these people are.

An annotation dated 20th June indicates the office should send a letter containing the “substance of above to Sir M. Levy”. Clearly any information coming from Turkey was scant and the lines of communication indirect, but within the UK establishment, this case was to get some attention thanks to party loyalties and perhaps a close relationship between Levy and Gray.

*As an aside, Horton was the consul from 1911-1917 (until the USA entered the war) and again from 1919-1922 (until the Great Fire of Smyrna). His influential 1926 book on Smyrna and the fire has important reportage, though is very clear in its, eh, loyalties… it is called The Blight of Asia: An Account of the Systematic Extermination of Christian Populations by Mohammedans and of the Culpability of Certain Great Powers; with the True Story of the Burning of Smyrna. It is possible to read the author’s relatively uplifting Chapter XIII “Smyrna as it was” in isolation: more extensive consumption of the text is recommended, but it is essential to read more widely to provide context, commentary, breadth and balance as part of a critical analysis. (If ever a book were able to provide spicy quotes to quickly satisfy the pre-existing prejudices of readers of a number of opposing perspectives, this is the one.)

Given the lack of any mention about Ebeth’s pregnancy previously,  it may well be that Ebeth’s parents only found out that Ebeth was pregnant through this very message (Fig 3), received by the FO on July 22nd and then sent onwards. 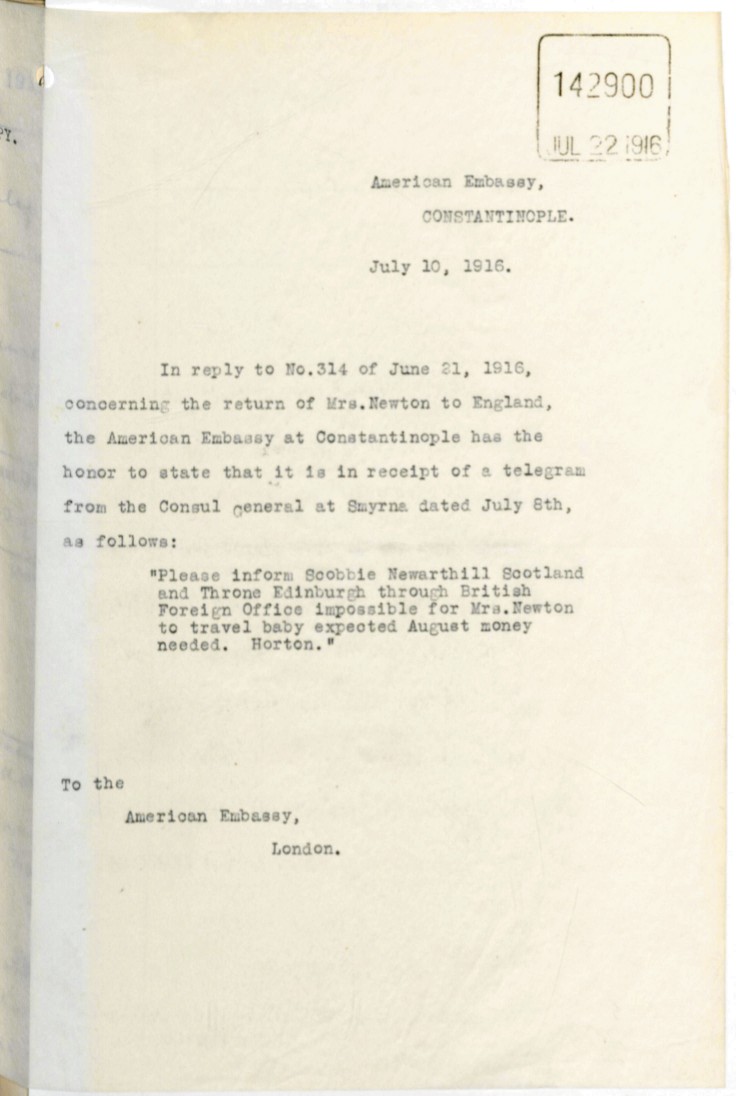 The US Embassy in London received this communique, or passed it on, on the 21st July, as indicated in this (revoltingly ornate) covering letter (Fig 4).

On the 18th July, 10 days or so after the US consul in Smyrna sent this news, they enabled another communication from Ebeth herself (“Mrs Elizabeth F Newton”), claiming on David’s life insurance policies (Fig 5a). What wasteful, florid language! Every word saps my spirit. The London dating of December suggests a delay in transmission from Smyrna, or a delay in informing the FO [Fig 5a, 5b]. Who knows if they or others sent other telegrams for her, previously or later.

[Fig 5b] below is the FO record (ref 247294) of the receipt of this communication, and the note (9th) that a letter or copy was forwarded to the assurance society.*

*University Life Assurance Society as an aside was acquired by the world’s oldest mutual insurer, Equitable Life, in 1919, and re-sold on 2007 to the Reliance Mutual Insurance Society, including their archives. 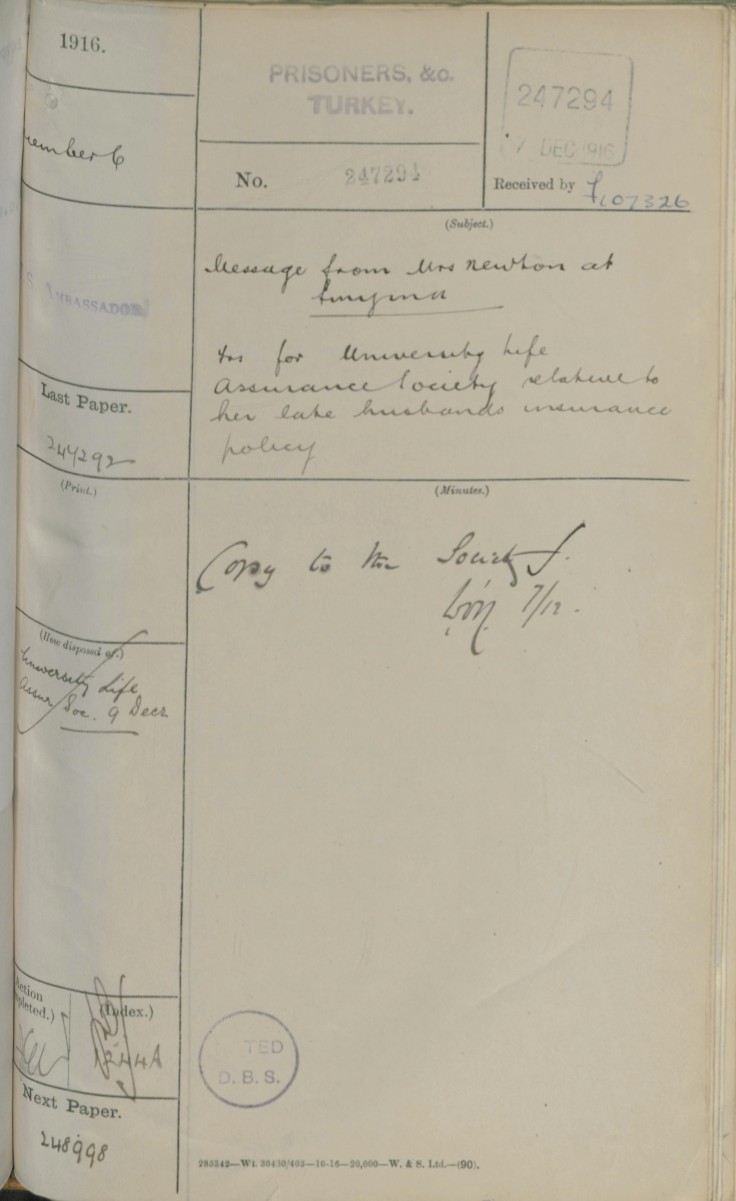 Three days later she also sent word to her father, and Dr Traill [the Rev John Trail in Fig 2], and reference 142900 notes a letter was sent to each of them on the 24th and to Levy on the 26th, perhaps dated 21st, or perhaps enclosing a copy of the original message from Ebeth, now dated 21st. 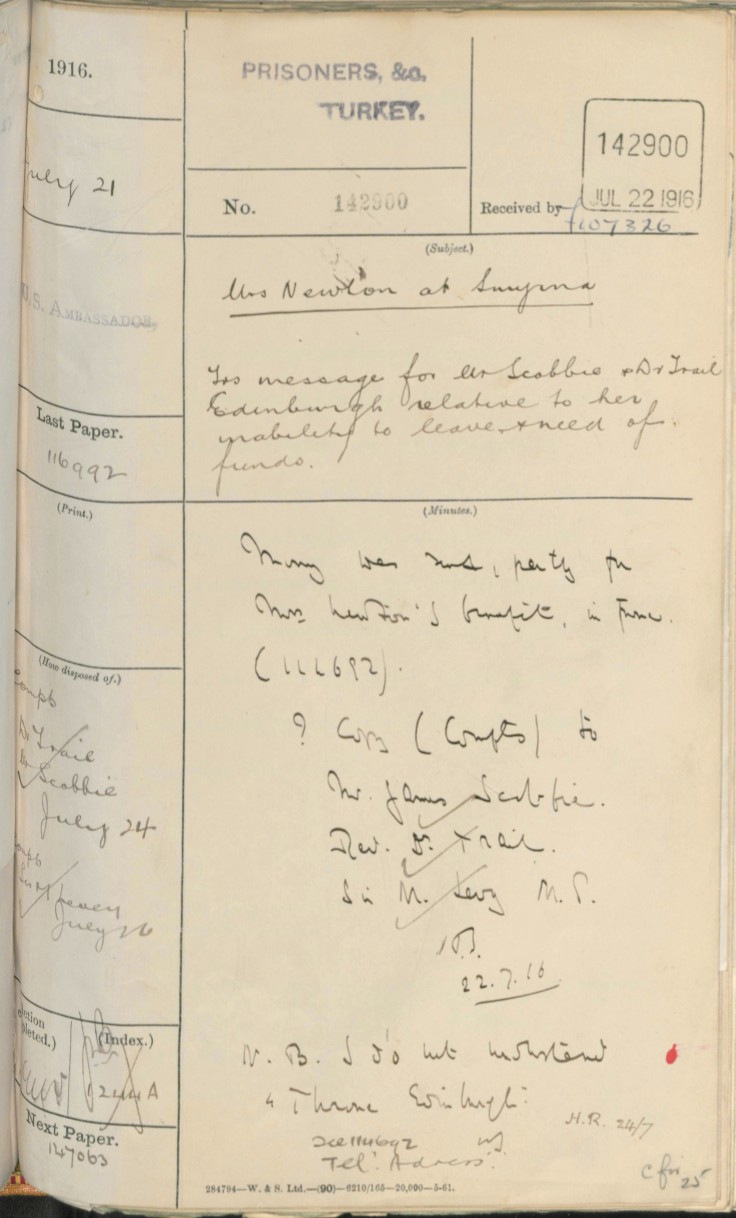 Her father replied on the 26th July from the family home in the village of Newarthill (Fig 7). “Dear sir, I have your communication 142900/P44/16 of 21st inst re Mrs Newton, my daughter, for which I thank you. I enclose draft on the National Bank of Scotland London for £50 which please forward via the American ambassador to my daughter Mrs Newton at Smyrna. I understand she is at present residing in rooms at the American College at Paradise near to Smyrna. Your obedient servant, James Scobbie.” 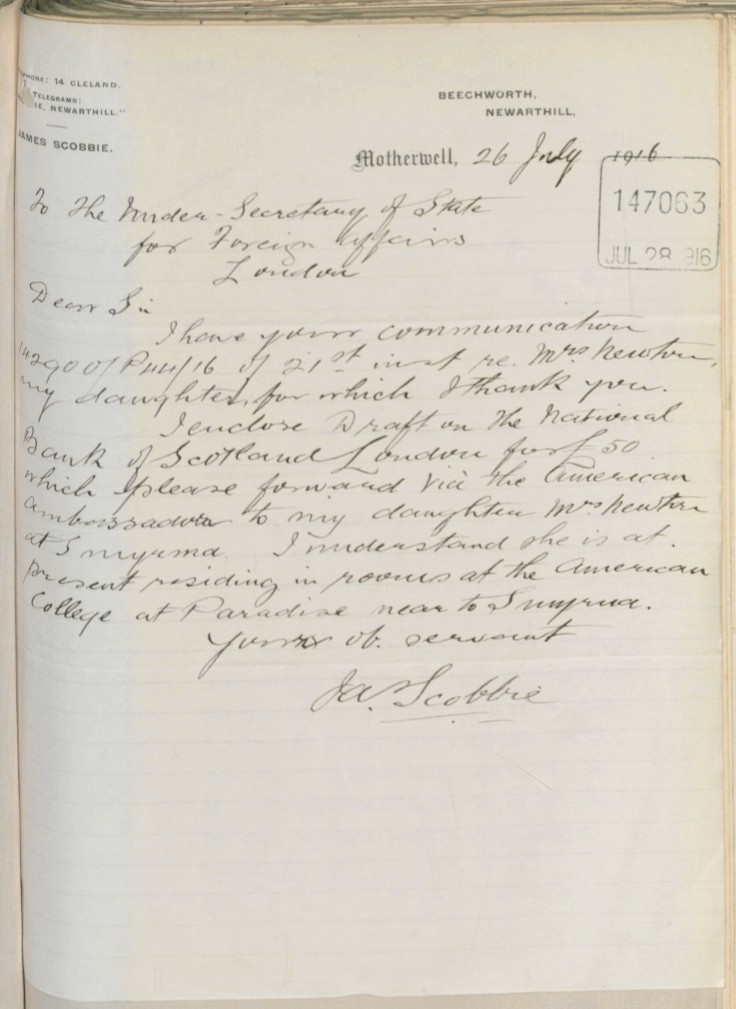 To finish off, back to some humanity. James Scobbie had received some communication or other, and in reply wrote to the Foreign Office on December 20th (Fig 11a, ref 258549), enclosing another £50 and the text for a telegram (Fig 11b). It is clear that some news had been reaching the Scobbies, from “Murray”, presumably the James Murray referred to in Fig 2 above.

(By now, Page the US ambassador to the UK had returned to the USA, and coincidentally he died the next day, on the 21st.)

The letter (Fig 11a) reads: “Re (248988/1244/P). I have received the above dated 15th inst from the Prisoners of War Department and in response thereto I enclose a short message for our daughter Mrs Newton of Smyrna, and will be very thankful to have it forwarded. I also enclose a bank draft for £50 which you might please also forward to her. Thanking you for this aiding us under the circumstances.

The telegram text (Fig 11b), in 30 words, is a touching way to end this blog full of official papers.

It reads (with added punctuation) “Dear Ebeth, delighted to know you and baby well. Longing to see you. Family circle well. Occasional news from Murray. Sending you £50 to-day. Best love from mother and father.”

National Archives provided the digital images of the original documents via its Discover site (2016) on request for a fee (they were not available online for download), and are “Public Records”, with Crown copyright as indicated here. (The transcribed content is copyright-waived).  I think the fee I paid covers the reproduction of the images. I hope so.

Death of Dr David McKenzie Newton at Smyrna, including:

This site uses Akismet to reduce spam. Learn how your comment data is processed.