Not only did I know nothing about my family’s brick-making business, it turns out that I knew nothing about bricks, and how brick-making, ironstone-mining, shale-oil and coal-mining were connected to those awful / / blaes school hockey and football pitches. Scottish kids like me who fell face-first onto this brutal surface will never forget it. You might have experienced the same thing on something you knew as a “cinder” track. But for me it will always be “blaes” (this spelling is new to me), though the word now conjours up more than just skint knees.

On his wedding certificate (17th April 1913) my father’s uncle David (David Laughland Scobbie of Beechworth, Newarthill), was described as a brickwork salesman. But Elizabeth Mitchell, our family genealogy guru, noted that he was “owner of Triumph Confectionery, Wishaw”. And I vaguely recall that my father said his uncle and aunt “ran a sweetie shop”. Occasionally I’ve searched google half-heartedly to find out what he really was, but with no results. Time to find out more.
Spoiler alert: num-num-num! 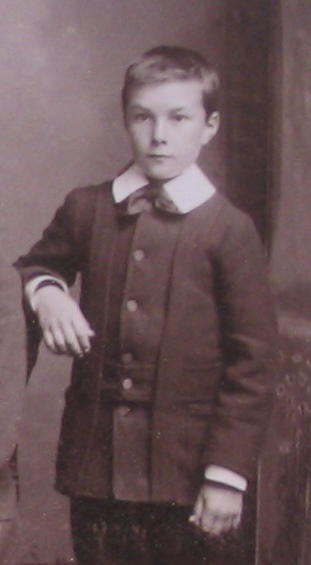 This was going to be just a set of photos, presenting images of a handsome boy who became a distinguished-looking man. He was my father’s Uncle David, whose ninety years and more spanned the major events of recent history (14 Jul 1886 – 25 Feb 1978). Even though I was a teenager by 1978, I never met him, or his wife Marion Young Dick (27 Aug 1884 – 30 Jul 1978). I’m not even sure how her name was pronounced. I’ve heard her name pronounced as if it started “Mary” with the vowel from FACE, rather than starting like “marry”, as would be expected.[1] This post is now more than photos. It’s a wee biography of the couple, and where they lived in Uddingston in Lanarkshire, leaving a trail of breadcrumbs for others.

Today, July 3rd, is a day to celebrate a long-lasting marriage. Fifteen years after the 1913 garden photograph on the eve of the Great War, discussed elsewhere, a Golden Wedding was celebrated, and ten years after that, in 1938, a much larger family of descendants and their spouses gathered with a photographer for group and individual shots that are full of formality and charm. The 1938 celebration was for the Diamond Wedding anniversary (60 years) of James Scobbie (1853-1943) and Williamina (“Mina”) Black Laughland (1852-1945), who were natives, neighbours and notable lifelong residents of Newarthill, a coal-mining village in Lanarkshire, Scotland. They were married by Mina’s father 140 years ago today, in 1878. The anniversary was written up in the local papers in 1928, 1938, and 1943 (a so-called “Ruby” anniversary), providing excellent detail of their lifelong relationship.

END_OF_DOCUMENT_TOKEN_TO_BE_REPLACED 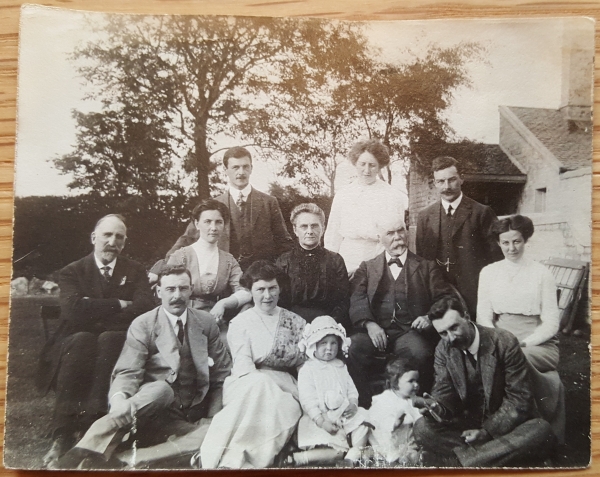 This Scottish summertime photograph, helpfully labelled on the back, celebrates the 35th (so-called coral) wedding anniversary of James Scobbie and Mina Laughland on July 3rd 1913, just before WW1. For photos from their diamond wedding celebrations in 1938 just before WW2 along with newspaper biographies, see the post on their diamond, gold and “ruby” anniversaries. A looming war is invisible in photographs like this, if we can resist the temptation to use hindsight to pour meaning into the expressions of the people in these gapless gatherings.